One of the worst things is having to deal with rumors about yourself. You’ll just be surprised one day that there is a circulating weird rumor about you. Some rumors would turn out funny or laughable, if this is the case you can just try to ignore it. But there are rumors that are really damaging, where the situation can get sticky. As frustrating as it is, it’s just a sign that you have more interesting life than that someone who started spreading rumors about you. Here are some quotes about rumor that you can indirectly say to those who started the rumors and make them feel guilty.

I love rumors; I always find out amazing things about myself, that I never knew about.

If you have problem with me, please inform me instead of making rumors about me.

Keep making rumors. I love them.

I’ve learned to laugh at people who spread rumors, cause the only reason why they spread them is because they have no life of their own.

Never trust what you hear about a woman. Rumors either come from a man that can’t have her or a woman that can’t compete with her.

People are probably not HAPPY with their lives if they’re busy discussing YOURS.

Rumors are carried by haters, spread by fools, and accepted by idiots.

You & your rumors have two things in common. You’re both fake and you both get around.

Once they realize hating isn’t working they start telling lies.

Rumors are spread by jealous people.

Rumors are usually nothing more than what jealous people wished were true of you.

I guess rumors are more exciting than the truth. 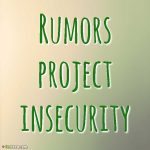 If you don’t know the whole story, don’t tell any of it.

Rumors travels faster but it don’t stay put as long as truth.

I’m too busy with my life to deal with your rumors.

You are what comes out of your mouth.