What you usually see in a person may not be who they really are. You can not directly see what lies within them because they only choose the kind of persona that they want to project. This is the reason why you have to be wary about the true personality of people you encountered every day because you will never know what is hidden behind all those smiles. In this world where many are hiding in two faces, you have to be careful on who you deal with because one way or the other, they will have the capability to destroy you if you loosen your barrier. 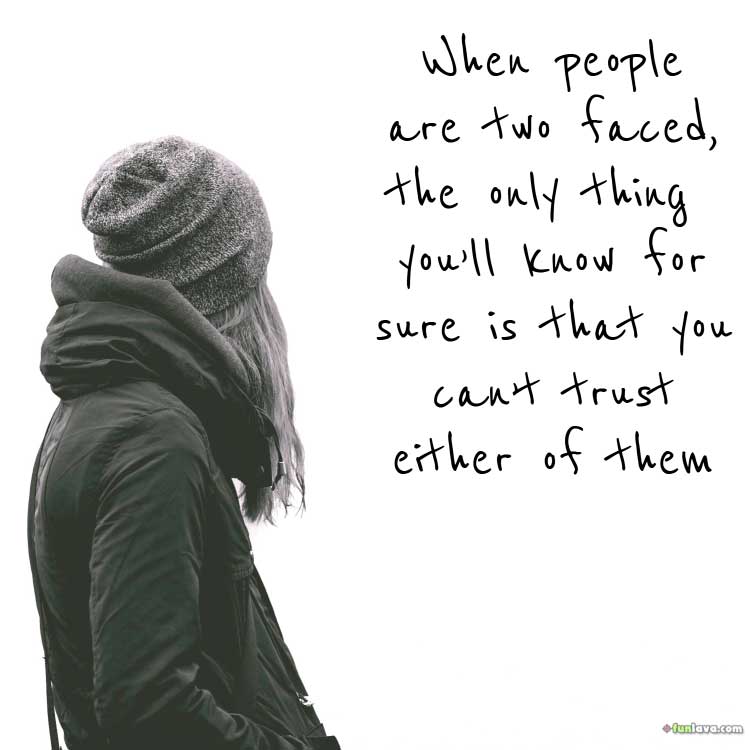 When people are two faced, the only thing you’ll know for sure is that you can’t trust either of them.

Every coin has two sides just like most people have two faces.

I don’t need a bunch of fake friends. It’s much better to have 4 quarters than 100 pennies.

Everyone has two faces but often we see only one side of them so never judge anyone by there looks.

I’d rather have an enemy who admits they hate me instead of a friend who secretly put me down.

Being nice to people you don’t like isn’t being “two-faced”, it’s called growing up.

I hate two faced people, it makes it harder for me to decide which side to slap first.

I think I need glasses. Everywhere i look people are two-faced.

If I were two-faced, would I be wearing this one?

Sometimes, it’s not the people who change, it’s the mask that falls off.

Look twice at a two-faced man

If you are going to be two faced at least make one of them pretty.

Never trust someone easily. You’ll never know they may be two faced quickly.

You remind me of a penny, because you’re two faced and worthless.

Why does everyone have to be so two-faced?

Two faced; It’s the latest trend, and everyone seems to be in style.

When I see you, I think I wonder which face she sees when she looks into the mirror.

I hate two faced people, it makes it harder for me to decide which side to slap first